The Democrats are having a great time with all their snarky SNL skits, huffy “articles” on Huffington Post and and the other 98% memes on Facebook.

The liberals surely feel like they are sticking it to the Republicans with their endless diatribes about morality and complaints about double-standard and logical fallacy from the GOP.

There is one simple fact in all this, and William Shakespeare said it best in Macbeth: “And then (they) are heard no more: their news is a tale Told by an idiot, full of sound and fury, Signifying nothing.”

Or to simply say, despite all their whining and complaining, all the Democrats ever do is whine and complain. While they go on pedantic academic rants about Trump’s ethics, they fail to realize that many Republicans just don’t care as long as the agenda is fulfilled.

What does this mean for Democrats?  Consider that in our GOP numbers, we have people who have actively condoned the actions of Nazi-Germany, reestablishing slavery and Jim Crow laws, revoking women’s right to vote and control of reproductive rights.

Democrats will sink in to their bubbles of satire and drink the champagne, assuming that hordes of people see the logic of what they so painstakingly draw out and they will somehow win the 2018 midterm elections, get Trump impeached and somehow get Kavanaugh’s nomination revoked and be able to safely let Ruth Bader Ginsberg retire.

Where the Democrats are wrong is that they are all talk and no action.  Minorities will not fight to show up to the polls in massive numbers.  Third party candidates will split the already gerrymandered voting districts, assuring Republican sweeps all across the nation.

Trump will not get impeached.   He will serve at least 6 more years and unless the ‘Notorious RBG’ makes it to 99 years old, he will able able to place ANOTHER conservative guy on the Supreme Court.  Democrats will keep whining and complaining on social media, that is, until all of that becomes a right of the past for them. 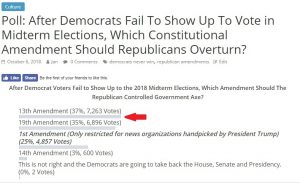 Local Police Rule Zebra’s Cause of Death As Suicide