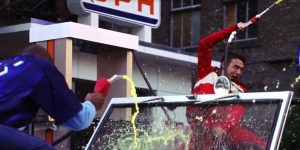 For years the gay community has sought to cause global cataclysm so that in the demise of human civilization, they can emerge as humanity’s saviors and usher in a new era of wanton carnality, fleshy sins and endless seduction.

For years, liberals have tried to paint conservative America as the culprit behind global warming.  Everything that says Americana, God and country seems to be blamed for destroying Earth:  cows, big V8 trucks, ‘big Texas Christian hair’ hairsrpays from the 90s and coal-burning power plants.

But that is so small.  Even if every cow, non-sinning human and truck on Earth were stacked in one big pile, there is no way that combination could do anything to impact the globe.  It is just too big.

The scientific community worldwide has worked hard to refute reports from paid gay actors purporting to be scientists and claiming that anything but homosexuality is the true culprit behind climate change.

It can be safely assumed that homosexuality is the primary cause of the recent climate change issue.

An early scientific journal written by Jude Thaddaeus documented the effects of climate change where hotbeds of homesexuality suddenly emerged:  “Cities with high per-capita homosexuality and towns around them, since they in the same way as these indulged in gross immorality and went after strange same man flesh, are exhibited as an example in undergoing the punishment of eternal fire”.

The text hints at a science beyond that of man, and that is, the science of faith.  It is written that gay acts cause fiery wrath.  Just look at California. The more homosexuality, the more fire the state endures.