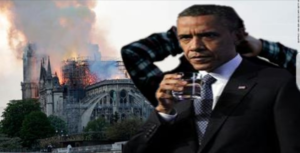 Three days ahead of the scheduled release of the Mueller Report, is it not a major coincidence that a beloved monument in France is burning down?

This image has popped up on moral news media circles and it is all too obvious that anarchist have staged an attack against religion to not only fulfill their secular aspirations for humanity, but to provide a literal smokescreen against the Mueller report that proves no collusion and that none other Hillary Clinton and Obama are guilty of being guilty.

Despite the conspiracies being peddled around the Internet, this is not true.  Obama did not boast on Twitter that he was happy that the 13th century cathedral was attacked.   In fact, Fox News put a hammer down on the conspiracy in true fashion of Fair and Balance Journalism.

Notice the two men in the image above.  They are wearing power suits, their America-proud chests completely covered with a