Embattled rapper Tekashi 6ix 9ine has continued his social-media alleged “snitch campagn”, finally revealing the answer to a burning question for suburban America:  Who let the dogs out? 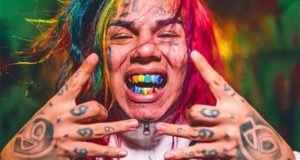 In the year 2000, suburban families started to note a trend of open fences and missing dogs.  Out of nowhere, homes across the country had repeated instances of dogs going missing and having to recruit neighbors for help in finding their family friend.

In the summer of 2000, the hip hop community made an anthem song to taunt and tease suburban America.  “WHO LET THE DOGS OUT?  Who, woof, who, wolf woof!” they barked in the lyrics aimed to bring pain to frantic moms and fathers as their kids cried over the missing family pet.

In the year 2000, the Clintons were leaving their presidential power behind.  As a parting gift to conservative America, Clinton/Soros allegedly paid urbanites to randomly stress Americana families by letting their dogs out, then have it rubbed I  their face via this stadium anthem song that played at every sporting event, radio shows and tv commercials.

Look at how Hillary Clinton is wearing all red, a trait shared with other rappers Tekashi 6ix 9ine has allegedly outed.